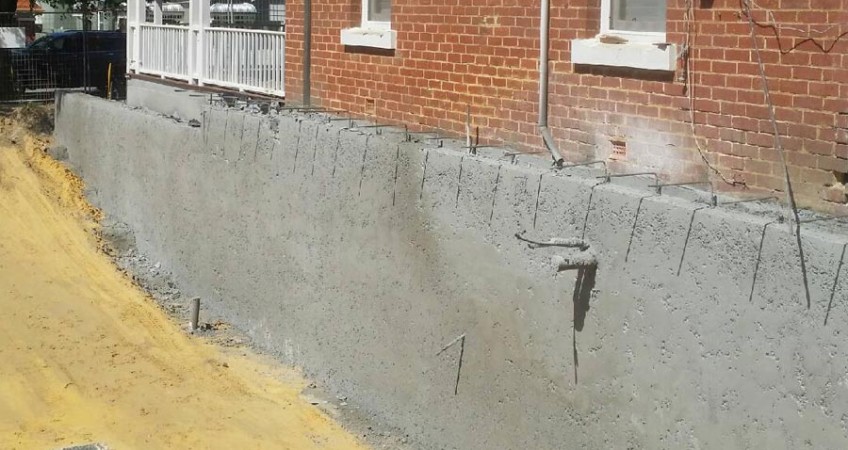 Posted by bmctest In Blog

The probability of a building’s foundation being unstable and weak increases with time; if movement surpasses the limit of the footing design, additional stress on the footing can cause them to crack, bend and/or rotate. Such stresses will then transfer to the wall or concrete slab above, leading to masonry cracks and, in extreme cases, may compromise the structural integrity of a building. This article will throw some light on how effective underpinning can lead to solid foundations and to the overall restoration of a building.

Destabilisation Of A Building – Common Causes

While concrete cracks with hairline plasterwork are considered cosmetic shrinkage issues that demand less attention, problems like stepped or long zigzag masonry with concrete cracks can pose a serious threat to the stability of a building.  These cracks demand immediate investigation before the problem gets any worse. The underlying causes of such an issue may include the following:

If a building’s foundation was designed and constructed under the watchful eye of a well-qualified and experienced engineer according to the Building Code of Australia (BCA) the chances of cracks due to construction method or design are quite unlikely. However, if the BCA was ignored or not followed properly, the materials used were substandard and/or the techniques implemented at the time of construction, then one can expect ‘less than ideal’ results.  If the Code is followed effectively then almost all residential properties can survive without any major damage for at least 50 years.

Unless the building contract makes provision for any kind of latent ground conditions (condition that was reasonably expected or known), the contractor or the builder will have to bear the brunt of increased expenses in building. It is highly possible for a less reputed contractor/builder to opt for shortcuts in order to save this extra expense which later on, looms as a threat to the stability of the building.

Additions and Alterations in the Building

When considering addition of a new level to the building it may be necessary to upgrade the building’s foundations to take the extra load.

Changes In The Environment

The foundation technology is no longer the same as the olden days. Many historical buildings that date back to the time period before 1950s in Western Australia are situated on sand sites and have their foundation on the simple “brick on flat” system that comprised of a double-brick row laid down on the sand with the walls constructed on top of them. Use of limestone blocks featuring brick walls with cavities was also common. Such foundation systems made the structure extremely rigid and did not expect any soil movement to take place underneath which is why these buildings are most likely to have unstable foundations.

Underpinning For Foundation Repair Or Stability

This method is effective in increasing the depth of the building’s foundation and is great for reinforcing faulty foundations. It can also help when new additions or alterations are made to any existing building or when the foundation happens to be damaged in any way. Cracks on the ceiling floors are the first signs of problems with the foundation that should not be ignored at all.

Apart from the above-mentioned reasons, here are some more problems that may demand underpinning:

For one or more of the reasons stated above, one must consult a professional and opt for underpinning as early as possible so that the safety of his/her building can be guaranteed.